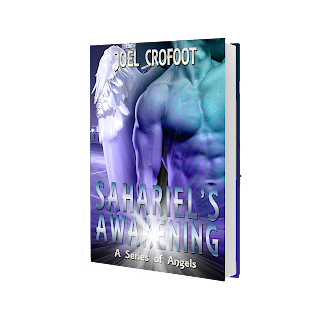 Sahariel was a fallen angel, cast into hell for sleeping with human women, but there, his radiant skin was a beacon to all demons. In effort to hide, he locked himself inside a coma, and snuffed out his light. But even though they have been released from hell, his slumber continues. All of that changes when a young woman wanders into his dreamscaped sanctuary, but how did she find him? Heather is a psychologist now residing with the earthly angels since they rescued her from a demon attack that left her with nightmares. One night, in her dreams, a man with luminous skin saves her, and she chalks it up to a dream until she discovers the man in a coma living in the back house. How could she have dreamt about someone she has never met?

He sat beside her on the bed, lingering and feeling her approach as she neared the realm of slumber and left the waking world behind. He could see her prone form now and the peaceful countenance of relaxation, free from worry lines or tension. One hand lay over her chest while the other fell at her side, and the hand over her chest was resting on a pair of ripe breasts pressed against her t-shirt that ignited a spark in his body. A desire he thought was dead was instantly resurrected, but there was more to it than that.
The tranquility of the moment washed over him too in way he hadn’t felt in a millennia. No danger, no threats, just peace. He longed to hold onto that feeling so much so that he didn’t notice his hand taking hers until his skin made contact with her fingers.

Her skin was warm and smooth.

Inviting.
Welcoming.
He pressed his lips to the back of her hand and felt the connection immediately, an all-encompassing peace wrapped around him like a warm blanket as he breathed in her scent and he didn’t let go when he felt her start to stir. How could he? He hadn’t felt security like this in so long and he wasn’t about to let go now.
Safe.
The hand he was holding suddenly jerked back and was followed by a slight shriek as she tried to back away.
Apparently she remembered him.
“Wait, I’m not going to hurt you!” he cried desperately trying to return the peace of moment but she had already jumped out of bed and was headed for the door. “Wait, please!”
“I don’t have horns or claws!”
She halted at the door when she noticed that he wasn’t chasing her but already her absence from him left a void of the comfort he had sought for so long and experienced for only a second or two. “Please don’t go,” he all but begged. “I won’t hurt you, I promise.”
“You tried to kill me!”
“I’m sorry, I thought you were a demon,” he replied, slowly venturing closer.
“Not all of evil is ugly. Evil comes in many forms,” he replied.
Everything he wanted to say raced through his mind and impulsively he wrapped her in a hug and nuzzled into her hair, despite her attempts to push at his chest. He wanted to say how he felt, to thank her for finding him, to tell her about his loneliness and his wonderment of her, but all that came out of his mouth was “Don’t leave me.”
She gave a skeptical look but turned away from the door, and his heart vaulted excitedly at the prospect of her sticking around. It felt odd and wonderful to be in the presence of another being. It was like coming home, but to a home he’d forgotten. He had the overwhelming urge to express this but he wasn’t certain how to proceed.
Then he pressed his lips to hers in a desperate, searing kiss that sent a yearning all through his body. Her smooth lips parted and with his tongue he tried to convey everything he wished he could say. He felt her accept his kiss, sucking more of him in, reassuring him, healing him, exciting him.
And loneliness.
“What is happening?” Heather asked in wonder when he’d finally reluctantly pulled away, allowing them both to catch their breath.
“You’re dreaming,” he whispered.
Oh crap, what am I doing?He asked himself as the sudden realization of his actions hit him. He was revealing himself, touching someone, and a human at that. The feeling of the monster he knew himself to be churned his stomach and he disappeared back to his world.
Back to safety.

It was him!
She’d never laid eyes on this man before but somehow she knew with absolute certainty that the man sleeping on the bed was the same one from her dreams. He had the perfectly blissful countenance of sleep, a trimmed stubble of whiskers, the same straight nose and full eyebrows. His lips were closed but the familiarity of their softness on hers was still fresh in her mind from last night. He was just as perfect in real life as he was in her sleep.
Was she dreaming again?
She placed her hand on his cheek to test the theory and he turned to nuzzle into it just before his eyes fluttered opened and found hers. The same dark blue she’d come to know in dreamscape was now gracing her and his hand landed over hers, clutching it to his face.
“It’s you,” he whispered, just as his skin began to emit a warm ray of sunshine, serving only to emphasize his physical appeal even more, like touching his skin was akin to touching a piece of God himself. 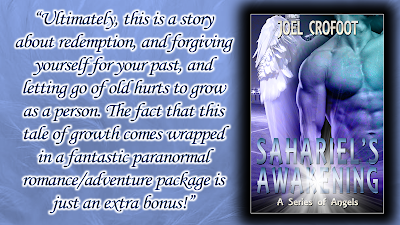 at 9:26 AM
Email ThisBlogThis!Share to TwitterShare to FacebookShare to Pinterest
Labels: Haney Hayes Promotions