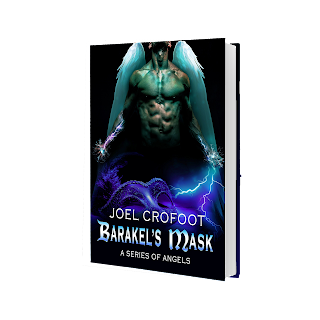 For the last few millennia Barakel has been lusting after his best friend, even protecting him for their whole sentence in hell, but now back on earth he must face reality and the reality is that Sahariel doesn’t feel that way for him. To make matters worse Barakel now has to live with a beautiful demon that he can’t get his mind off of, but after his time in hell he’d never let himself touch someone so evil. Philotanus has made a living by leading men into temptation, a path he began long ago when it was made clear to him that this was all he was good for. But having sought the protection of the angels in exchange for a scroll means learning a different version of his own story. Could he be ready for a new path or is he just setting himself up for another heartache? With a baby on the way it is more important than ever for our favorite angels to find and eradicate the local demon horde, but can they do it in time? Will this baby be their salvation or annihilation?

“Holy shit Dude, watching you type is like watching grass grow,” Philotanus complained over Barakel’s shoulder. Barakel was sitting at a laptop computer that Philotanus had set up in the living room of the back house and was filling out an application for the Red Door Society, with the fake identity that Butator had supplied him with. “Then don’t watch,” he grumbled back, and swiped a calloused hand over his scruffy beard in exacerbation. He heard a laden sigh come from Philotanus. Technology wasn’t Barakel’s forte because as the angel of lightning he had to really be mindful of his frustration level around all things electric or else he might accidently fry whatever he was working with. He read over the questionnaire in front of him. “It wants to know what I like sexually.” “So?” Came Philotanus’s voice from several feet back now. Apparently the demon had given up supervising him. “So what do I write?” he called back. “What are you into?” What was he into? He hadn’t had sex in hundreds of years, how would he know? He turned around to make a snippy comment about Philotanus helping him supply answers that would get him accepted into this society, but he stopped short at the sight before him. The demon, who was an attractive sight to behold upright, was now bent over with his palms on the floor and his butt in the air. His feet were slightly spread, making his tight little ass look like an open invitation, and the stirrings in Barakel’s stomach at the sight made him uneasy. “What the fuck are you doing?” “Yoga. It's good exercise especially when you’re irritated by watching someone hunt for letters on a keyboard, but if you keep looking at me like that maybe I’ll do it more often.” He shot Barakel a sly grin, ran his tongue over his bottom lip, then he walked his feet up to his hands, showing off his flexibility. The demon gracefully changed positions and turned, standing on one foot with his other cocked into his knee and placed his hands in a prayer hold at his heart, as if nothing had just happened. Even his perfect, intentionally-messy looking, dark hair hadn’t been disrupted, but now his dark, sensuous, gaze was fixated on Barakel. Barakel felt his mouth water at the thoughts conjured by the pose he had just seen. No! He scolded himself. “You look like a fucking tarot card like that,” Barakel retorted, unwilling to give in to the demon’s temptations. Demons were all alike. Evil.

A quick scan produced seven other people in the room, none of whom Philotanus recognized. The men were similarly dressed to him but the women wore various versions of lingerie mixed with miniskirts and stilettos. Elaborate Venetian masks adorned them all.
“This way,” he said to Barakel and led the other man to the bar. “Scotch and soda, and a highball,” he ordered. When their drinks arrived they moved to a far corner and eyed the room. “Now what?” Barakel asked.
Barakel shot him a questioning look and Philotanus shrugged. “Humans are always shy about this kind of thing for the first hour or two. It's best to just stand here until they start coming to us. Trust me, I’ve experimented.”
“Now we stand around awkwardly until everyone drinks enough to accept that they’re here for a sex party and everyone else knows they’re here for a sex party.” A few minutes of silence went by before Philotanus broke it. “So what’s your preference? Men or women?” Barakel straightened up at the question. “None of your business.”
Barakel scrubbed his beard with a sigh. “I don’t know. Whomever strikes me at the time.”
Philotanus wanted to laugh at Barakel’s unease with the subject of sex. It seemed such a contradiction to have someone so powerful with so many insecurities. “C’mon man, we’re at a sex party. If there are any others…” meaning demons “here who are trying to listen in, we should be talking about sex.” It was a lie. Philotanus just wanted to know. “Same,” Philotanus volunteered. “So what's your favorite body type?” Barakel just glared at him, so Philotanus decided to try a less direct approach.
Philotanus smiled, eager to finally have Barakel playing along. “The dark haired one in black.”
“Okay, you see that group of people?” Philotanus pointed to the bar where about 10 newcomers had gathered, all waiting on drinks with their backs to him. “Just from behind without looking at their faces, who would you do?” “No one. I don’t do sex.” “Wrong answer at a sex party. Just pretend with me, play along in case someone is listening.” Barakel rolled his eyes but then studied the group. Finally he said, that one with the light hair. Philotanus took a sip of his drink and nodded approvingly. “Good choice.” Male, narrow hips, tight ass. Noted. “You?” Barakel asked.
Philotanus snickered along with him and soon they were into a game of rating everyone who walked through the door on an attractiveness scale. It was actually kind of fun, and even though the angel would never admit it, Barakel was smiling now.
The woman in question turned her head enough for both of them to get a good look at her and with their enhanced vision they could see the amount of makeup she was wearing and her efforts to cover her skin. “Aww man,” Barakel laughed. “Yours looks like she got hit in the face with a bag of hot nickels!”

at 10:00 AM
Email ThisBlogThis!Share to TwitterShare to FacebookShare to Pinterest
Labels: Haney Hayes Promotions