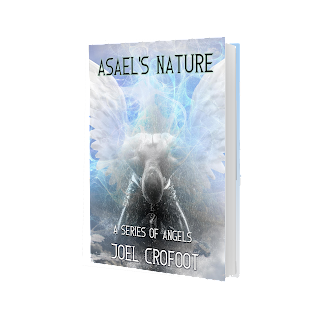 When the fallen angel Asael returns to earth, he slips back into his old ways as the angel of punishment by performing in night clubs until he gets an interesting new client - a demon who enjoys his punishment shows. Isda, a young healer, gets dragged into the ongoing war for her research into a new drug and attracts the attention of demons. Asael is assigned to protect her and the relationship begins to bloom, but her feelings are at odds with everything she has been told about how to behave, and can she compete with the demon that shares a passion of his?

Asael watched Isda from his perch above the crowd. The service was over and the place was emptying but some people lingered to finish their conversations and to start new ones. Isda hadn’t moved, save to stand and let others out, yet the humans kept coming up to her, smiling their greetings and hugging their fondness. She looked so at home here among them. He wondered how old she was and decided she must be young if she was just starting to teleport. The power she emitted wasn’t like the dangerous strength of the warriors he was used to but it was there. Different, but present. It felt young and untamed, but it also felt welcoming. Warm. She healed while he injured. The thought made him feel all the guiltier for coveting her but he couldn’t help it. He’d been a sucker for her since the first night he’d seen her at a meeting before their battle against Molech’s demons. She’d been wearing scrubs then too, the ones that hugged her shapely form. Her pencil skirt wasn’t fooling anyone either. Isda didn’t have the tall super model look that Jahi had, nor the athletic figure of Clara, but her beauty was in her curves. He wasn’t sure that he’d call her full-figured, just that she was round in all the right places—places that excited him. Her hair was thick and shiny and he wanted to feel it between his fingers. He wanted to grip those hips and feel her softness against the hardness of him. She seemed his polar opposite in almost everything. She was young, he was very old, almost as old as Gabriel and Michael. She was light-hearted, jovial, and innocent, and he was… tarnished. As Asael sat watching her, he noticed that she was pulling out her phone and opening messages. He squinted at the tiny screen, using his heightened angel powers to see it. There was a message from Murniah, one of the local lesser angels that read “New boyfriend?” Isda was typing a response and he straightened his neck trying for a better angle. “Just a bodyguard,” she replied. A twinge of disappointment struck him at her words and he replayed them in his mind. She hadn’t said “My bodyguard.” She’d said, “Just a bodyguard,” as if his position could have been filled by anyone. As if she hadn’t specifically asked him. The more he pondered it the more he decided she was probably right. Any of the males at Gabriel’s could do this, and he had been her last choice, but then again, she was the one that appeared to him the other night. No, he was reading too much into it. He was just a bodyguard.

Judging by the sounds of the arguments coming from Jahi and Michael’s room, Jahi was getting cranky from being cooped up too. The real urgency though for Isda was that she was in a race against Uphir, the demonic physician who likely had Dr. Morrison’s notes to make a breakthrough with the blood. What if the demons were trying to make a new weapon? What if they were trying to raise Lucifer again? Whatever they were up to, it was probably bad. She would be lying to herself if she didn’t acknowledge that a part of her loved being needed. This was the first time that she was involved with the war effort directly. Ok, so she had helped at that last battle, but she was just being reactive then, not proactive. Now she had a chance to really contribute. Her. The youngest healing angel in the world. A smile swept over her face at the thought. For thirty-six years she had been the good little angel, always referenced as though she was a child, and in some ways she knew she really was at least compared to angels like Gabriel and Michael or even the fallen for that matter. They all wore their well-honed skills like finely polished, precise armor. Hers was like a hole-riddled blanket flapping in the wind. She hadn’t even known what her power was until about ten years ago; and since that time she’d just been practicing and studying under the guise of a nursing teacher. Now she was a guest in Gabriel’s house and a contributing team member! Passing the paintings of epic angelic battle scenes that lined the hall, she tiredly moped toward the stairs lost in thought, her eyelids still heavy with sleep, until something hard rose up right in front of her and hit her in the face. Ow!What the-?! The wall. She’d walked into the wall. Maybe that shrink was right. What was she going to accomplish in this state? Her thoughts shifted to the fact that she had slept through her chance to see Asael today, and decided it was probably for the best. Good little angels weren’t supposed to fantasize about fallen angels and their pierced tongues. What would Chabuiahsay? She should be avoiding him so she wouldn’t get corrupted… but she didn’t want to avoid him. And she didn’t want to be the good, little angel anymore! Dammit she was an adult. Right? Maybe. He was everything she wasn’t. He was exciting, dangerous, and impulsive, with those long, sultry eyelashes that only he could sport and still look masculine. He wasn’t afraid to go out into the night. He didn’t run away from demons. Like she did.

at 8:00 AM
Email ThisBlogThis!Share to TwitterShare to FacebookShare to Pinterest
Labels: Haney Hayes Promotions